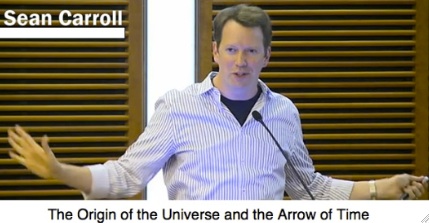 One of the most obvious facts about the universe is that the past is different from the future.  We can remember yesterday, but not tomorrow; we can turn an egg into an omelet, but can't turn an omelet into an egg.  That's the arrow of time, which is consistent throughout the observable universe. The arrow can be explained by assuming that the very early universe was extremely orderly, and disorder has been increasing ever since.  But why did the universe start out so orderly?  I will talk about the nature of time, the origin of entropy, and how what happened before the Big Bang may be responsible for the arrow of time we observe today.

Sean Carroll is a physicist at the California Institute of Technology. He received his Ph.D. in 1993 from Harvard University. His research focuses on theoretical physics and cosmology, especially the origin and constituents of the universe. He has contributed to models of interactions between dark matter, dark energy, and ordinary matter; alternative theories of gravity; and violations of fundamental symmetries. Carroll is the author of From Eternity to Here: The Quest for the Ultimate Theory of Time, Spacetime, as well as Geometry: An Introduction to General Relativity, and The Particle at the End of the Universe. He has been awarded fellowships by the Sloan Foundation, Packard Foundation, and the American Physical Society, as well as the MIT Graduate Student Council Teaching Award and the Villanova University Arts and Sciences Alumni Medallion. Carroll is a contributor to the blog Cosmic Variance. He has appeared on TV shows such as The Colbert Report andThrough the Wormhole with Morgan Freeman, and frequently serves as a science consultant for film and television. He lives in Los Angeles with his wife, writer Jennifer Ouellette.

This lecture is sponsored by the High Energy Frontier Theory Initiative and the UC Davis Physics Deptartment.

The lecture was held Wednesday, May 22, 2013, at the UC Davis Conference Center.