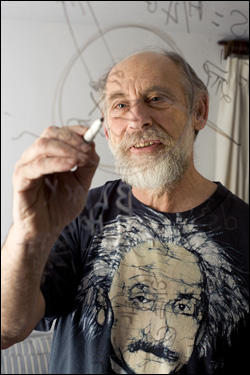 Professor Leonard Susskind of Stanford gaveve a public lecture at the ARC Ballroom at UC Davis on Oct. 17, 2006 at 7:30 pm. Professor Susskind started out working for his father as a plumber in the Bronx. He attended City College of New York in order to become a heating engineer, but discovered that his real aptitude was for physics. He is now a internationally well known physicist and often referred to as the "Father of String Theory." Along the way Susskind has made tremendous contributions to a many areas of theoretical physics, such as quark confinement, the theory of scaling violations in quark scattering, and technicolor. His latest contributions include important work on the string theory of black holes, cosmology, and the implications of a "landscape" of possible universes (ours being just one) making up a "megaverse". Leonard Susskind's achievements have earned him numerous prestigious awards, including the Sakurai Prize in Theoretical Particle Physics in 1997. He is a member of the National Academy of Sciences and the American Academy of Arts and Sciences. Susskind is also known for his down-to-earth and entertaining style of giving lectures.

"The beginning of the 21st century is a watershed in modern science, a time that will forever change our understanding of the universe. Something is happening which is far more than the discovery of new facts or new equations. This is one of those rare moments when our entire outlook, our framework for thinking, and the whole epistemology of physics and cosmology are suddenly undergoing real upheaval. The narrow 20th-century view of a unique universe, about ten billion years old and ten billion light years across with a unique set of physical laws, is giving way to something far bigger and pregnant with new possibilities. Gradually physicists and cosmologists are coming to see our ten billion light years as an infinitesimal pocket of a stupendous megaverse. At the same time theoretical physicists are proposing theories which demote our ordinary laws of nature to a tiny corner of a gigantic landscape of mathematical possibilities."

This lecture was sponsored by the High Energy Frontier Theory Initiative and the UC Davis Physics Deptartment. Call 530-752-4086 for more information. 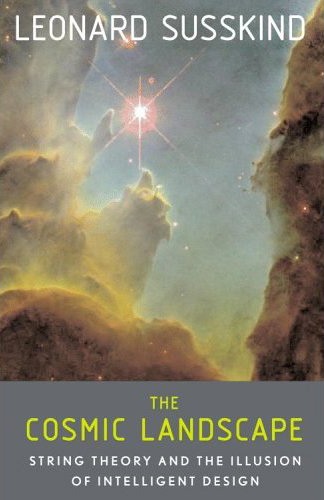 The Cosmic Landscape: String Theory and the Illusion of Intelligent Design

From Booklist Physicist Susskind is a founder of string theory, and his first popular work will be of utmost significance to science readers. They will be challenged throughout by Susskind's ideas, of which strings are but a part; his driving curiosity is to discover why the laws of physics are what they are and so finely poised to permit life. Susskind discusses how slight alterations of physical values would destroy atoms and, hence, life. Deeming unscientific any proposition of a supernatural agency in setting the physical dials so exactly, Susskind advances a radical concept he calls the "landscape." Valiantly explaining it to his lay audience, Susskind, after introducing the moving parts of his theory (general relativity, quantum mechanics, vacuum energy), compares our universe to a rolling ball on an undulating landscape. Its place of rest equates to our laws of physics. In this extraordinary work, Susskind ushers us to the mind-bending edge of a possible paradigm shift. Gilbert Taylor Copyright � American Library Association. All rights reserved