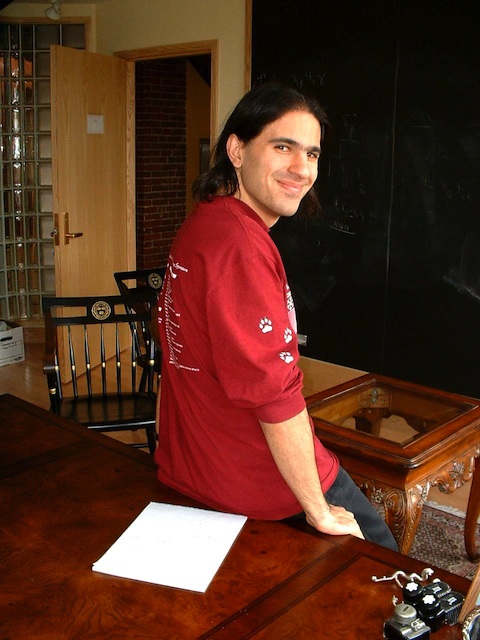 Renowned theoretical physicist Nima Arkani-Hamed will give a public lecture at UC Davis entitles "Space-Time, Quantum Mechanics and The Large Hadron Collider". He first gained renown as a young post-doctoral fellow for his seminal work on extra dimensions. He joined Harvard's faculty in the fall of 2002. Arkani-Hamed has appeared on various television programs discussing space, time and dimensions and the current state of theoretical physics. In 2003 he won the Gribov Medal of the European Physical Society, and in the summer of 2005 while at Harvard he won the 'Phi Beta Kappa' award for teaching excellence. Arkani-Hamed won the Raymond and Beverly Sackler Prize given at Tel Aviv University to young scientists who have made outstanding and fundamental contributions in Physical Science in 2008. That same year he became a faculty member at the prestigious Institute for Advanced Study in Princeton, New Jersey, where Einstein served from 1933 until 1955. Arkani-Hamed is widely regarded as the leading theoretical particle physicist in the world. In 2010 Arkani-Hamed gave the Messenger lectures at Cornell University, following in the footsteps of Richard Feynman.


Professor Arkani-Hamed gives the following description of the talk: Fundamental physics started the 20th century with the twin revolutions of relativity and quantum mechanics, and much of the second half of the century was devoted to the construction of a theoretical structure unifying these radical ideas, which has been confirmed to exquisite precision by experiments over the past three decades. But these foundations have also led us to a number of precipices in our understanding of Nature. The union of quantum mechanics and gravity strongly suggests that space-time is doomed--what replaces it? Furthermore the unification of relativity and quantum mechanics predicts violent short-distance quantum fluctuations that make existence of a macroscopic world wildly implausible, and yet we comfortably live in a huge universe--what tames these violent quantum fluctuations, and why is there a macroscopic universe? These are some of the central theoretical challenges of fundamental physics in the 21st century. It is very exciting that a spectacular new experiment--the Large Hadron Collider--is now running and poised to shed significant light on at least some of these mysteries. In this talk I will describe these ideas, and discuss what we can expect to know by 2020.

Admission is free. This event is sponsored by the High Energy Frontier Theory Initiative and the UC Davis Physics Department. Call 530-752-4086 for more information.


View ARC at UC Davis in a larger map

Parking is $6. Purchase your all day parking permit from the yellow dispenser machine located near the entrance of each parking lot. Please note that visitor parking is also available in staff parking lots/spaces (designated as A lots/spaces) after 5:00 pm. Permits may be purchased from the dispensers in the parking lots. The machines will accept quarters, $1 bills, Visa or MasterCard credit cards.