Tumblrs for Visualization in Science This is a screenshot taken using the Gephi data imaging program, the visualization is a map of a selection of pollinators, with links relating each organism. Some are farther apart than others, and some are not connected at all. This map can be used to see the difference between the types of pollinators, which can clearly be seen to be bees, and what exactly they pollinate, it is more effective than using a table or other method of explanation. This directed graph shows the relationships between pollinating animals and the plants they pollinate. The image was made in Gephi from a dataset using a force-attraction simulation. Node size indicates to how many plants are pollinated by the node organism, while node blueness indicates how many different animals pollinate the node organism.

Topologically, we see that there is just one large component with a handful of smaller components, possibly revealing clues about the history of these relationships. 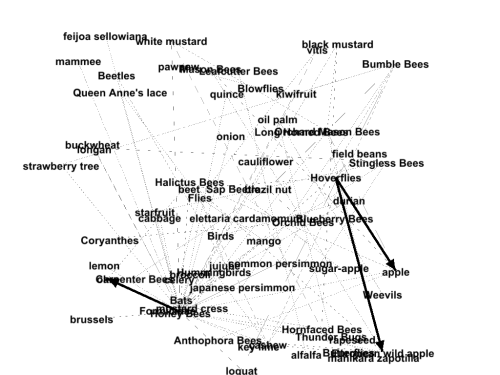 This chart was made using a program called Gephi. It allows one to see the connection betweens different types of bees and varied produce. 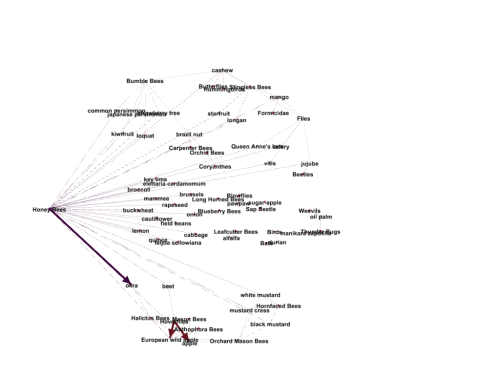 This is a picture of a type of chart the connections of different wildlife and how they connect to each other. This was created using Gephi. It has a font size of 48, Repulsion Strength of 3000, and an attraction strength of 2.0. 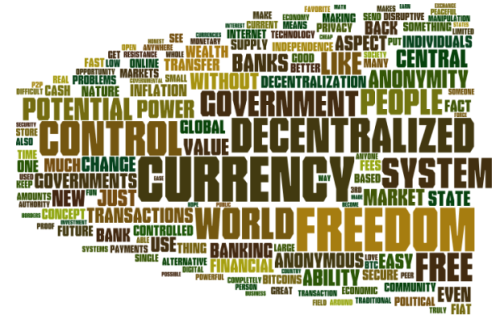 Bitcoin collection of words representing what Bitcoin is about in a compact way with many different images of words juxtaposed. The image is made by using the software Gephi, with gephi I was able to identify relationships between insects and the plants they pollinate. After making some adjustments, I notice the highlighted arrow pointing directly at Okra,  this means that Honey Bees are pollinators of Okra plants. To verify this connection I’ve searched several online sources such as http://www.aces.uiuc.edu/vista/html_pubs/BEEKEEP/CHAPT8/chapt8.html and it appears the relationship is true.

“I’m not supposed to die; I’m the protagonist!”

The two images above are MRI images, one without contrast dye and another with. The image above is the MRI scan without contrast dye which is obviously visually harder to see the contents of the image. Right below it we can a much clearer photo with clear distinguishable body parts. The dye used in the photo is called Gadolinium. This dye has a strong magnetic field and affects the appearance of tissues on images which absorb the dye and causes it to appear brighter on the image. Those this dye carries some effects that can severely sicken patients who have kidney diseases it can help doctors detect different abnormalities  tumors, lesions, etc. 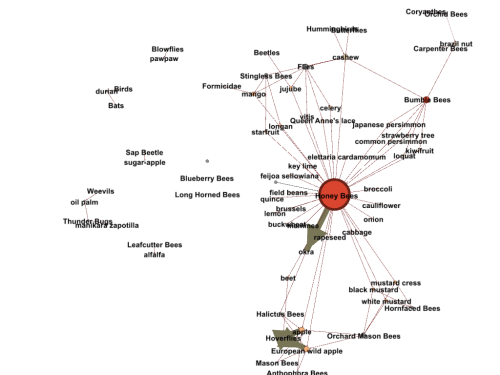 The network diagram was made using the Gephi data visualization software and code provided on SmartSite. It shows which insects pollinate which foods. The size of the circle around the insect name is proportional to the number of foods it pollinates. From the network, it can be seen that honey bees pollinate more food than any other insect in the network by far. This photo was made with computer software linking together dozens of different species of plant and insect, based off of a set of code. I arranged the bubbles to show the links between various kinds of fruits, vegetables etc against that of the insects, with larger animals off to the right. The main links can be seen to the Honey bee, however what you may not be able to see from this picture is that no links connect any of the insects to each other. This is suriprising that they would be linked more often to the vegetables then one another, and this software has enabled us to see that

My first blog post for my blog Swordholder Film Reviews, but it isn’t a review. ;)

The nominations for the 88th Academy Awards were announced Thursday morning, with eight films being nominated for Best Picture out of a possible ten slots. The Leonardo DiCaprio frontier-revenge film The Revenant was nominated for 12 Oscars in total and the post-apocalyptic thrill-ride Mad Max: Fury Road was second with 10 nominations. The other six films nominated were The Big Short, Bridge of… This is a network image of various types of bees and what flowers and plants they pollonate. The distance between each object is proportional to the degree of relatedness between the objects. The lines shown connect bees to plants, showing what each bee pollenates. From this network graph, we can begin to understand the various relationships between bees and the plants they pollonate, and we can analyze the plants a certain a bee pollenates in order to determine how that bee interacts with some plants versus others. 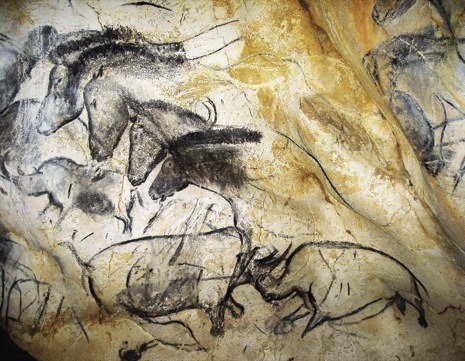 The oldest known human art is also the oldest known human attempt to record Nature.  This painting is 34,000 years old and was found in the Chauvet-Pont-d'Arc Cave, which is the subject of Werner Herzog’s film: Cave of Forgotten Dreams. Herzog used a 3D camera to capture how the shapes of the walls were incorporated into the paintings.